After what seemed like a long adoption process, Ivy knew the first thing on their to do list after leaving the animal control center was give Winnie a bath. Then she realized she didn’t have anything for Winnie, they went shopping for food, treats and bedding. Ivy was more than sure Winnie felt at home with all the new things she received after the shopping spree. Ivy wanted “Darcy” to have a fresh start and gave her a new name, Winnie! The shelter gives all the animals random names, but Winnie was never trained to answer the name Darcy, so it was easy to get her to respond to her new name, which is a play on Ivy’s last name Wingate.

How To Train A Dog

As Ivy shares stories about welcoming Winnie into her new home, she also talked about the training process, and how long it took Winnie to come out of her shell. Ivy explained it took about 6 months for Winnie to blossom because she was 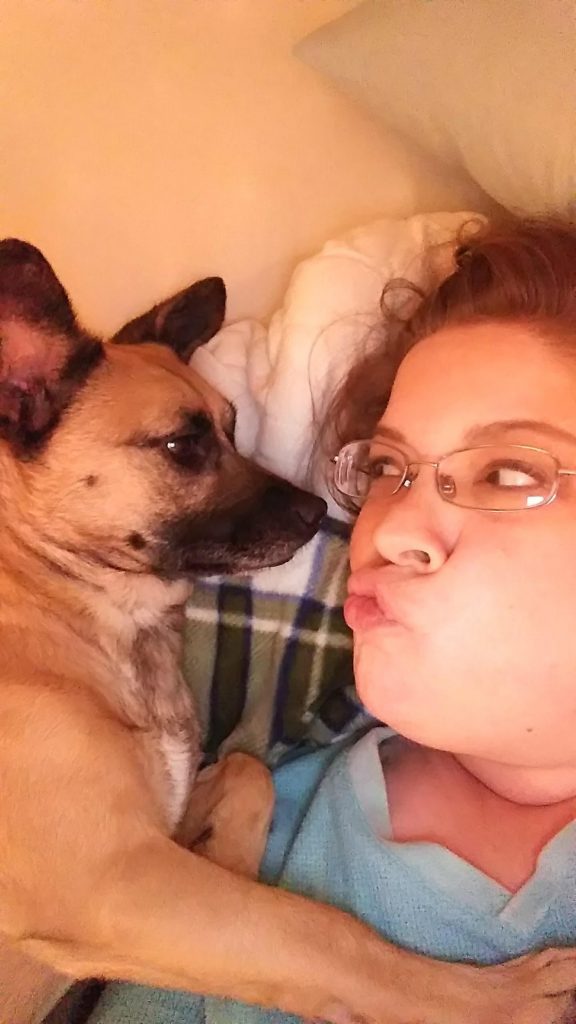 very anxious upon her arrival, which turned into her tearing up blinds and door jambs. Ivy remained patient and did a lot of research to figure out how to get Winnie well adjusted. She found out crating Winnie while she is at work could make her separation anxiety worse, so she decided to ditch the crate. Now Winnie is able to roam free and Ivy is welcomed home each day by Winnie’s sweet face, instead of her whining in her crate.

When it came to physically training Winnie it was pretty easy, and she already knew how to sit.  Ivy also taught her “wait” when they were getting ready to go out for a walk because the last thing she wanted Winnie to do is run out the door.  She’s pretty good at sitting in front of a wide open door, although Ivy would never trust her if a squirrel came running by. Winnie knows “down” and “bed” as well as “Go sit” which

means go sit on the couch. She’s starting to get the hang of “watch me” and they are working on “leave it” and “roll over”. Ivy does not pressure her with a bunch of rules so she is free to roam around, sit on the couch and sleep in the bed, which is why Ivy calls her the best cuddle buddy! 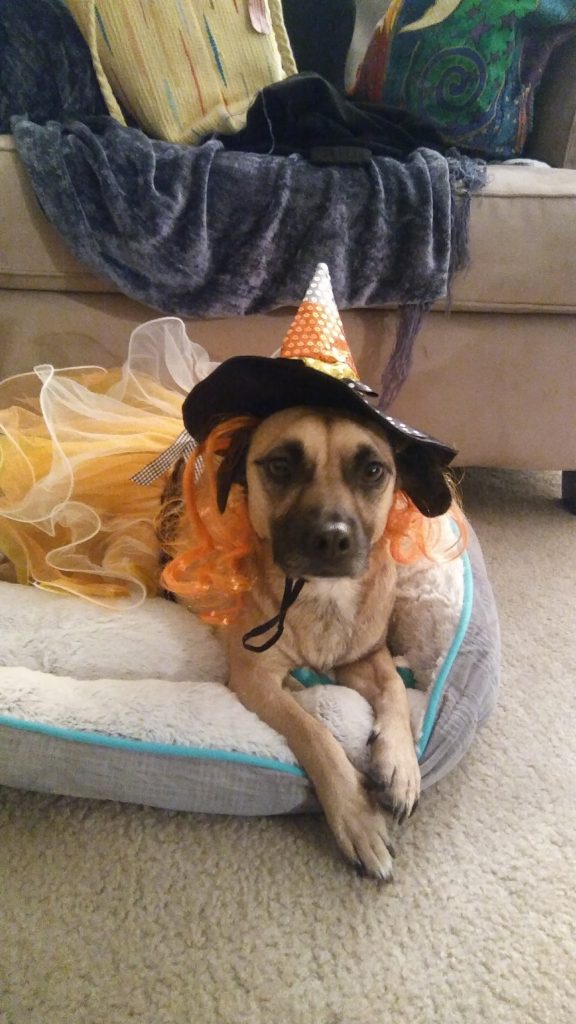 Winnie in one of her favorite costumes!

Best buds is an understatement, Winnie is stuck to Ivy like glue since the first time they met. A lot has changed in the last year. Winnie is more calm and the two learned how to cope with the separation anxiety. Winnie is now used to her daily routine and knows when Ivy returns home that it is time for a walk or some leash-free fun.

Ivy has learned that a pet can change your outlook on life. Not only are you changing your own life, you are saving and changing a life of an animal. Animals need love and attention just like people, so it was very encouraging and heart felt to hear Ivy’s story of how she saved and changed the life of Winnie.

Ivy and Winnie attended the 2018 Rescue Dog Olympics where Winnie won the costume contest! They plan to attend the March 10, 2019 festival in Piedmont Park—a dog lovin’ festival and dog party, so Winnie can reclaim her best costume title!

Go to Writings of Mariah to view my blog!